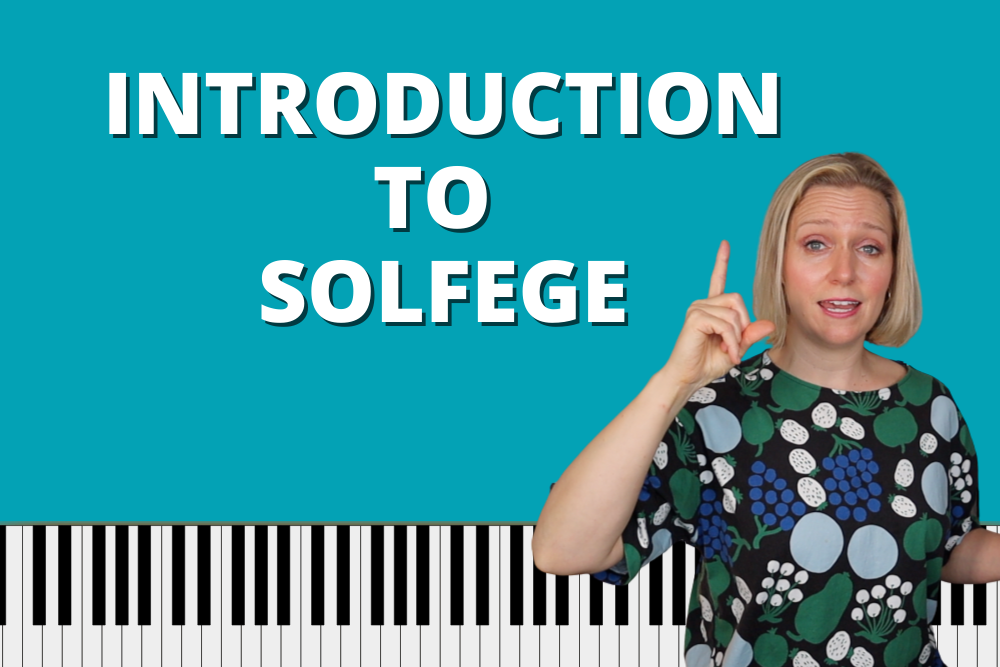 Solfege is a technique of naming the notes in a way that describes their function.

In movable ‘do’ solfege, whatever key we are in, that note is ‘do’.  If you’re in the key of A, then A  is ‘do’. If you’re in the key of C, then C is ‘do’. The reason that we use solfege and not just note names is because we want to describe how the notes function. Depending on what degree of the scale we’re on, that note has a function and a sound. By using solfege, as well as the Kodaly hand signs, we’re actually describing that function.

Zoltan Kodaly was a great master pedagogue from 100 years ago. Part of his work was trying to find a way of making musicianship accessible to young people. He came up with what’s widely known as the Kodaly hand signs. This information is really helpful for us because these hand signs go along with each degree of the major scale. It’s really terrific because the signs that he uses are actually very descriptive to how each of these notes function in the scale.

When we look at the ‘do’ you can see it’s this fist and it’s saying to us we’re home, solid, secure and indeed the tonic or the first note of the scale is home. It’s home we’re done we’re finished the song is over.

You can see the hand sign that Kodaly came up with was diagonal Re really wants to resolve down to Do – can you see that Re is unstable because it’s on a slant?

It’s very clear Fa either doesn’t like to move or it wants to resolve down to Me.

Again, you can see it straight across so it’s saying; this is a note that doesn’t need a lot of resolution.

La wants to resolve down to sol.

Ti is the finger pointing up, it’s the resolution resolving up to Do and that’s why they call it the leading tone and where is it leading you? it’s leading you up to Do again.

The hand signs aren’t something important for you to memorize, especially if you’re an adult musician doing this just sort of for your own information. It is something however for you to use a little bit so that you can really tune into the function of the notes. Once you can see the function of the notes, you’re training your ears to hear them. When you hear music, you are going to have an easier time being able to pick out what it is and be able to either play it on the piano or to understand how it’s functioning.

Our next step is going to be to outline the tonic triad. This is the home triad so if we’re in the key of A then the triad is A. I’m going to go back to my Do drone to help stay in the key.

Anytime I want to get myself centered in the key area very quickly, I’ll give myself the tonic note in whatever key I’m in. Then I’ll go through that routine. This is the time if I’m ever away from a keyboard that I use my good old master key pitch pipe. I can blow any pitch on here I want so let me give myself an A. Now, I’m securely in the key center. This is a great way to practice & everyone should have one of these tucked in their back pocket. You could just use an app on your phone too

In this short period of time you sang up and down the major scale in solfege and I showed you the hand sign so that you would get a feel for how each of these notes function.

We then went through the tonic triad which are all the resting or the home notes in the key. Finally we worked through getting comfortable with the idea of the moving notes resolving to the resting notes. A great way to work on this is to practice it in a whole bunch of different keys. All of the notes are going to function the same way. Me is always going to be a resting note, Ti is always going to be a moving note in major, etc. Feeling it in different parts of your voice is a really really great way to reinforce these concepts!

You Can Learn To Play By Ear Using SOLFEGE

Solfege is a powerful tool that helps to develop your musical ear.  In this video, I show you how it works, what it’s for and how to practice it to grow your musicianship.  Solfege is NOT just for classical musicians – it is incredibly useful for everyone!

Want to learn Solfege and build your ears and musicianship skills?

The Versatile Musician is an all-in-one membership that combines video lessons, print material and live support to help you level up your skills and thrive as a musician and music teacher.

To learn more, check out www.theversatilemusician.com and get ready to level up your musical skills!

Motivation Monday – Tell People!
Next Post: You Can Learn to Play By Ear using SOLFEGE