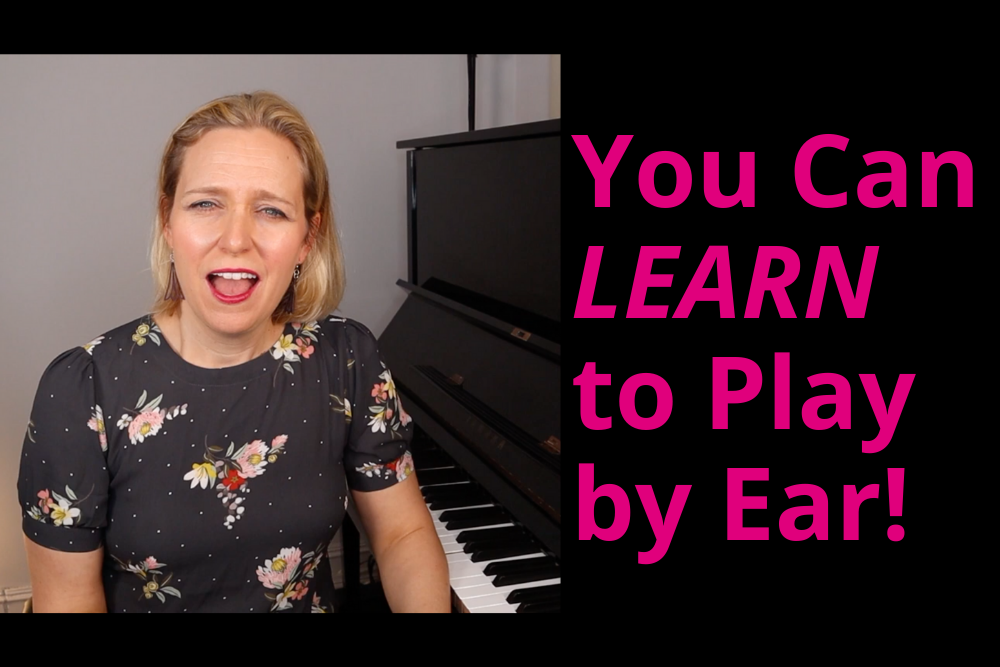 Is playing by ear something you are born with?

Some people are born with the skill of playing by ear and we’ve all met those people. They can somehow rattle away and play all kinds of really wonderful music. I have even heard music teachers say this is not something you can learn. Well, that is 1000% false. I know you can learn this because I learned it. Yep – years and years of piano training and there was no way I could sit down and just play something by ear. Over the years, I’ve taught a ton of people how to play by ear and today I’m going to teach you.

Three Steps to Playing By Ear

Step 1: Get used to hearing something in your head and then trying to locate it on the piano

You’re going to sit down and try to see if you can take a song that is very familiar to you and figure out how to play it. The best way that you can get yourself started is to get situated in a key. Take a minute to get yourself situated in a key center. For example, if you adjust to the key of C then play a simple, well-known song like Mary Had a Little Lamb, you won’t have a hard time plunking out the notes on the piano.

Step 2: Take a piece of music that may be a little bit more complex or in a different key and practice learning this by ear

This could be anything; a bass line that you’ve heard, a little guitar part, a little saxophone line, something very small. I like to think of the song my My Girl and the famous baseline. Take a second listen to the recording of it a couple of times. Sing it over and over again and see if you can find it on the piano.

I taught my song to play by ear!

**I taught my son how to play by ear. He’s really into the music from Mario and from the Sega Genesis and from Minecraft which is great because they’re very repetitive and they’re also relatively simple. I sat down with him and showed him how to do this and we did this a bunch where he sang and tried to plunk out little bits and bites and before you knew it, he could do this too! In fact, he does this all the time. He’ll come in here with the song in his ear and he’ll sit and tap it out until he finds it. He’s only nine & he’s been doing this since he was eight so at whatever age you are, you can do it too.**

Step 3: Learning the song by ear

Before you do any of this there’s one thing that will really help a lot: can you play your major and minor chords in all 12 keys or in most of the keys? Most of the songs that you’re going to work with (if they’re pop songs, if they’re music theater songs or simple classical pieces/sing-along songs) is going to be comprised of major triads & minor triads. It helps a LOT if not only can you play them, but if your ear can hear the difference. In order to be able to hear what a song is doing, you kind of have a two-step process: the first thing that you want to do is get a sense for what the baseline of the song sounds like, then you’ll want to practice hearing it in the context of the song.

A drummer I used to play with (we used to go on the road together) would sing along to the radio by only singing the bass notes which I thought was so strange. What I realized was he was actually training his ear – instead of hearing just the melody all the time, he wanted to be able to hear the lower pitches.

You’re not going to sit down tomorrow and be able to play by ear as if it’s the easiest thing in the world but I’ve just given you three steps to get you in the direction to do that! Keep practicing & soon enough you’ll be enjoying your newfound power as someone who can play by ear.

If you want to learn to play by ear using SOLFEGE, check out this post.

Want to take your ear training a step further?  Check out:

You Can Learn to Play By Ear using SOLFEGE

Want to learn Solfege and build your ears and musicianship skills?

The Versatile Musician is an all-in-one membership that combines video lessons, print material and live support to help you level up your skills and thrive as a musician and music teacher.

To learn more, check out www.theversatilemusician.com and get ready to level up your musical skills!