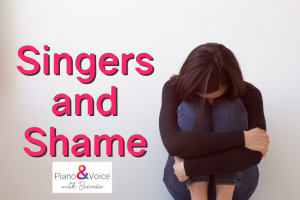 I have been thinking a lot about shame in music education lately.  I can’t get over how many times my private students and members of The Versatile Musician tell me how much shame they have over what they don’t know how to do.  Same is something I understand too  well, which is why I decided to write this post about singers and shame.

Recently, in response to a post I made about Piano Skills for singers on a Facebook (my favorite subject!)voice teacher’s forum, a fellow voice teacher replied:

There it is: shame.

Whenever we “should” someone (or ourselves), we are actually casting shame.  We are saying that if they can’t play piano (or properly clap quarter note triplets, or play by ear, or…), that they are less than the voice teachers that can.

My response to this person was:

“The problem with “should” is that it makes people feel terrible, which is counterproductive. Imagine how it must feel for our colleagues reading this who don’t have that background!  It doesn’t make anyone a lesser voice teacher – many wonderful voice teachers don’t play much piano.” 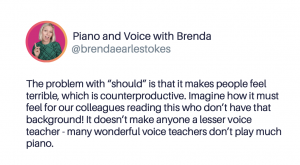 “We all should have had some kind of necessary training (I coun basic accompanying to it) before we start teaching, not during.  That is what I call standards.” 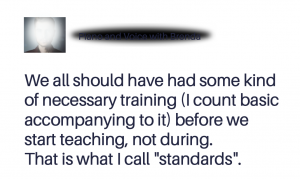 What I find so sickening by this exchange is that:

That’s shaming for you:  bringing others down so you can feel superior.

“Shame is that warm feeling that washes over us, making us feel small, flawed, and never good enough.”

Shame is a terrible motivator

Shame is a terrible motivator.  Ironically, shame can even prevent someone from ever tackling a challenge they have.  Instead, those feelings of shame will cause people to hide  Worse yet, it might cause them to mask so that it renders them unable to even get the help they might need.  Not only is masking stressful, but it can often drain someone of more energy then it would take to actually learn the skills.

My own battles with shame

I have had my own battles with being shamed.  In my first year of university (as a piano major),  I was full of shame over the holes I had in my skill set.  Despite having taken weekly  piano lessons for over 13 years, there were so many things that I was unable to do.  I felt so unprepared for university, struggled with my self esteem, and felt like I would never catch up..

I’ll never forget the saxophonist who asked me how I managed to get into the jazz program without knowing how to play good voicings.  (He then proceeded to sit down at the piano and show me all the things I “should” know how to play.)

This is why the shame cycle can be so debilitating:  it keeps you from being able to seek the support you need to succeed. If it hadn’t been for my shame, I would have felt more confident asking for help from my professors.

If it hadn’t been for my shame, I would have felt more connected to the other music students who were also working on their playing.  The help and support I could have obtained would have expedited my progress and helped me to feel more secure in my work.

When I first started teaching my singer friends to play piano, I was amazed at the level of shame that surrounded their lack of piano skills.  These were amazing performers, who had toured all over the world, had been nominated for Grammys, where phenomenal teachers and were by anyone’s standards, absolutely incredible musicians.  Their struggle:  they hadn’t been able to get their piano skills in check to support their performing, songwriting or teaching.

Some of these singers begged me not to tell anyone that they were taking lessons, because  they didn’t want anyone to know that their piano skills were weak.  A few of them felt that they had a learning disability or were “too dumb” to learn to play piano.

It absolutely baffled me that these incredible singers assumed that they were subpar musicians just because they struggled at the keyboard or didn’t have a solid handle on theory.

Singers are often not properly taught piano skills, theory and musicianship.   Many of courses are taught by pianists or theory professors who only know how to cater to the needs of pianists, NOT people who are using the piano as a tool to support their singing or teaching.

Because these skills aren’t being taught effectively (or at all), it repeats the shame cycle over and over again.

Looking Down at Singers

There is also an undercurrent of looking down at singers that still exists in so many institutions.  Everyone knows the joke:  How do you know a singer is at the door?  “They can’t find the key and don’t know where to come in.”

It should come as no surprise to you that this joke makes me mad as Hell.

There is an implication that because singers don’t “play an instrument” that they don’t have the same value as instrumentalists.  The “dumb singer” stereotype an old story that is deeply rooted in sexism.  (The idiom of the “chick singer” standing in front of the band)  this has perpetuated through continuing education and doesn’t serve the very people it ridicules.

Singer shame is a huge problem and one that needs to be retired.   If someone is lacking piano skills, or isn’t good at sight singing or has rhythm struggles  it doesn’t mean that they aren’t a good singer or voice teacher.  We need to let go of the culture of shame and instead embrace that everyone is on a different (and worthy) path.

You Can Learn Whatever You Want Whenever You Need It

It doesn’t matter if you are 20 or 80 – you can learn what you want and need to know.  Seeking lessons or courses doesn’t mean that you are weak or a bad teacher; it makes you someone who is prioritizing professional development.

Music Education Needs to Do Better

What I would like to see from the music education community as a whole is a movement away from casting shame upon people with different abilities in exchange for a culture of inclusion and support.  This would lead to an environment where everyone would feel safe to be transparent, ask questions and have the space to actually learn new things.

We also need to hold our students and colleagues up to a much higher standard of conduct.

Rather than spreading arbitrary standards around like a measuring stick, we could instead start to identify the blind spots in how we are educating singers and how we could better serve them.

It is time to dispense with shaming each other and move towards understanding and encouragement.

Have you ever felt shame around your musical skills?  Has anyone ever shamed you?