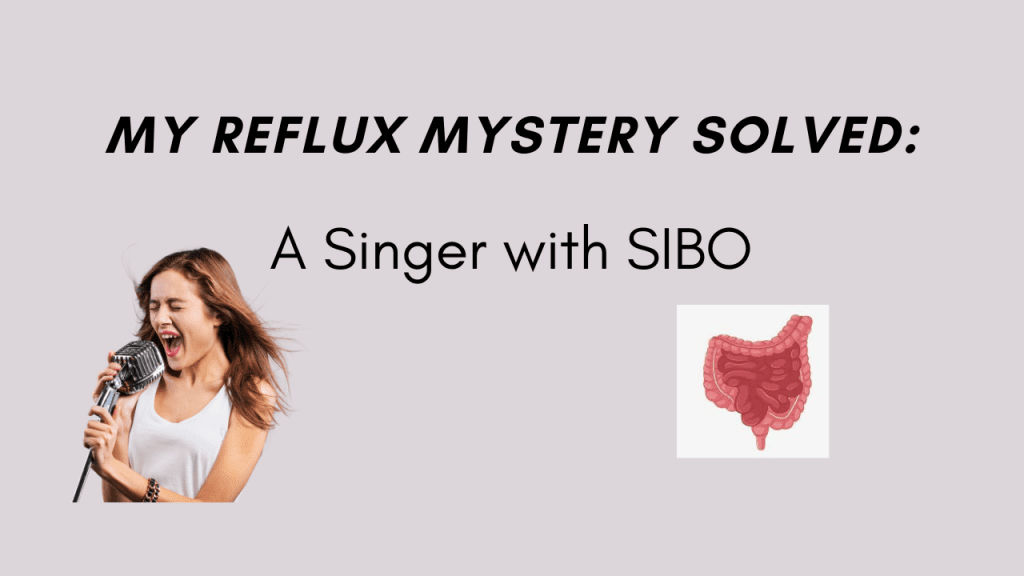 **This article on a Singer with SIBO is not meant to provide medical advice.

As a professional singer I can say that one of the most frequently discussed topics amidst my singer friends is something many of us suffer from:  Reflux.  Not only can it be uncomfortable and even painful, but it can cause a lot of issues with the voice.  When stomach acid and vapors makes their way up your throat, it can lead to huskiness, hoarseness and even complete loss of voice.  Like many singers, I have struggled for much of my adult life with reflux.  Once particularly bad period of reflux even led me to develop vocal fold nodules, which I describe in my blog post “I had nodules, and this is what I learned.”

Read about my journey with nodules here.

Whenever I have a flare up, I use a reflux protocol that I have developed over the years that includes taking several supplements, including DGL, aloe vera juice, papaya enzymes and probiotics, plus dietary changing like cutting back on coffee, acidic foods and high fat foods.  When it gets really bad, I will even pop a couple of antacids just to calm it down.   This protocol has been effective for me for years, usually eliminating the reflux in a few days or a week at the most.

In June of 2018, I woke up with reflux that just wouldn’t go away.  After four weeks of my usual remedies, I was absolutely miserable:  my throat was raw, I had a terrible lump in my throat sensation (globus) and I had heartburn nearly 24/7.  My speaking voice was totally hoarse and singing was almost impossible.  The reflux was making it difficult to sleep and I was experiencing some of the worst anxiety of my life.

An endoscopy performed by my Gastroenterologist showed I had a pretty substantial hiatal hernia.  He sent me home with a prescription for a PPI (Protein Pump Inhibitor – a drug often used to treat reflux) and told me not to eat spicy foods.I then went to my Laryngologist who performed a video stroboscopy to have a look at my vocal folds, which were quite inflamed.

My throat was quite red and I had a lot of mucus around my vocal folds.  Knowing that I didn’t want to take PPIs, he sent me home with an H2 blocker and advised me go on a reflux diet for a few weeks (no coffee, spicy or acidic foods).  More weeks went by and I had no relief.  I had eliminated all the usual triggers from my diet, was taking all the medication and I was getting sicker.I went to two other Gastroenterologists, one of whom told me that I would never get better: that I would always have reflux and need to be on PPIs for the rest of my life.  Since PPIs can cause long-term health issues, I was unwilling to go down this road unless it had to be this way.

So many things didn’t add up for me:  What caused the reflux?  How did I get a hiatal hernia?  Could there be something else going on?Around that time I started working with Sara Kahn, a registered dietician who focuses on functional nutrition and is well known for her work with people suffering with IBS (irritable bowel syndrome).  In my work with her, I learned about a condition I have never even heard of:  SIBO.

SIBO stands for Small Intestinal Bacterial Overgrowth and occurs when bacteria from your large intestine migrate into your small intestine.  The small intestine, where most of the absorption of nutrients occurs, is located between your stomach and your large intestine (colon) and is meant to be almost sterile of bacteria.  When the bacteria overgrow in the small intestine, they digest your food and release gas into your system.  This can cause gas, bloating, diarrhea, constipation and even malabsorption of nutrients.  SIBO is present in 80% of people with IBS and can show up with people with autoimmune issues.SIBO is still a relatively new diagnosis and a lot of medical practitioners don’t know about it, which can make it very difficult to address.  To test for SIBO, you do a Lactulose Breath test.  After a partial fast for 24 hours, you blow air into a a test tube, drink a lactulose solution and then blow air into 9 more test tubes every 15 minutes.  I sent in the testing kit and two weeks later I had my diagnosis: my hydrogen levels were very high and my methane levels were astronomical.  I had SIBO. 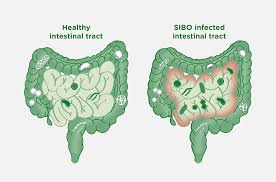 SIBO can be caused by poor diet, digestion issues, a stomach virus, food poisoning or anatomical issues like adhesions.  We think that mine may have been caused by the 5 courses of antibiotics I had to take in 2018 for a series of strep infections I got.  I had no idea that this could do so much damage to my system and I thought that taking probiotics would keep my system in check.  Turns out, the antibiotics killed the strep and also knocked out most of the good bacteria in my system, leaving a perfect place for bacteria to overgrow.  (Ironically, the treatment for SIBO is often antibiotics.)Sara Kahn says:

We specialize in IBS and SIBO so most of our clients have one these or some sort of         digestive condition.   I can talk about the symptoms and the diagnoses we see…         Many of our clients present with gas, bloating, diarrhea or constipation (or both).  Some will have acid reflux, in addition to these symptoms.  Some clients have been diagnosed with IBS but with further investigation and testing, learn that they have SIBO or other forms of dysbiosis (unbalanced gut bacteria).  And some clients have already been diagnosed with SIBO when they start working with us.  In both cases, we use diet, supplements and lifestyle changes to help improve digestive function and reduce symptoms.

The first step was to address my diet, first with the Fast Tract Diet and finally with the Low FODMAP diet, both which limit fermentable carbohydrates that encourage the growth of bacteria in the gut.  Sara gave me great guidance as I completely overhauled what I ate and she recommended several supplements to support better gut function.I then found an excellent Chinese medicine doctor named Dr. Beth Hooper. who specializes in treating people with SIBO.  Her expertise in treating SIBO came from her young daughter’s diagnosis.Dr. Hooper says:

SIBO occurs when commensal bacteria from the large intestine migrates to the small intestine.  While the large intestine is colonated with many bacteria, the small intestine is meant to be relatively bacteria free.  When bacteria finds its way into the small intestine, where there is an endless source of food, it can rapidly overgrow causing many unpleasant symptoms.  For many people that overgrowth produces hydrogen gasses, disrupts digestion, impairs nutrient absorption and causes abdominal pain, diarrhea and exhaustion.  For others, the overgrowth produces both hydrogen and methane gases.  This also disrupts digestion, impairs nutrient absorption and causes abdominal pain, but it also causes severe constipation, acid reflux and burping.  In both cases SIBO will cause gastritis, damaging the lining of the small intestine.  This damaged lining or leaky gut allows larger molecules of food to enter the bloodstream and can trigger food sensitivities and possibly even trigger autoimmune diseases.  Modern medicine treats SIBO with antibiotics.  This is a double edged sword as the antibiotics will clear up the bacterial overgrowth, but at the expense of bacterial diversity in the gut microbiome.  In Chinese Medicine we use a range of herbs with antibacterial properties that help heal the gut lining and preserve its microbiome.

Dr. Hooper put me on a course of herbal antimicrobials like allicin and berberine, which kill off the overgrowth.  She also got me on a regiment of additional supplements which helped to build up my stomach acid and aid in motility.  She treated me with acupuncture and helped me make some significant lifestyle changes.  I needed to work on sleeping better, reducing the mammoth stress I was under and moving my body in a more deliberate way.

The Road to Wellness

Within a couple of weeks I felt so much better.  The globus sensation went away, as did the 24/7 heartburn.  My motility improved, the bloating went away and I no longer had mucus in my throat all the time.  Most importantly, as a singer my voice was clear and singing felt and sounded good again.

Like magic, my hiatal hernia went away too, as confirmed by an endoscopy I had about six months later.  It turns out the bloating and pressure in my abdomen had pushed up so hard that it popped my hiatus up, causing a lack of closure in the valve.  Once the pressure in my gut was reduced, it allowed my stomach to be guided back into the right place.

Once my system calmed down, I was able to finally feel healthy and well again.  I ended up having a few more SIBO flareups, which caused Dr. Hooper to recommend I be tested for food allergies and sensitivities.  In those tests, I discovered a list of foods that were possible triggers to my system.  I felt an immediate difference.

What I Learned From My Experience with SIBO

This experience with SIBO, as horrible as it was, really helped me put the focus back on my health.  I have lost over 20 pounds, my skin is clear, I have tons of energy, my immune system has improved and so have my moods.  This health crisis gave me a huge wake up call to listen to my body and be proactive about taking care of it.  I walk 2-5 miles every day, do yoga, meditate and I have taken HUGE steps towards managing my stress.  As the mom to an 8 year old, who runs a business and has a performing career, it is not always easy to squeeze in self-care, but now I prioritize it every day.

I also have also learned how to eat properly to fuel my body and if I have a set back, I know how to handle it.  The biggest takeaway for me from all of this, was to take my health into my own hands.  I refused to accept that I would have to accept reflux as a daily part of my life.  I strongly recommend any fellow reflux-sufferers to investigate what might be the root cause.  It is worth taking care of your health.

From the National Center for Biotechnology Information: Click here.

How to Count Off the Jazz Band
Next Post: Vocal Jazz Introductions